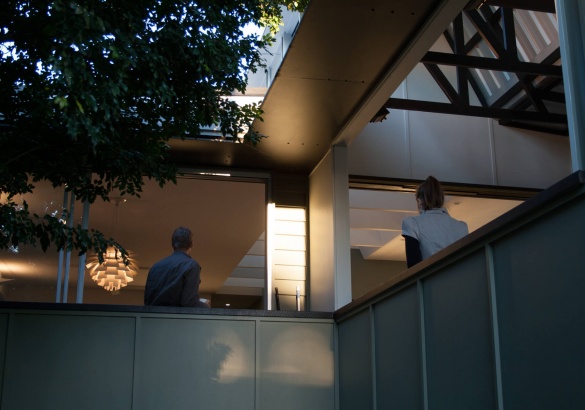 This modest budget renovation transformed a small dark 2 bedroom cottage into a flexible light filled home for a family of five. The upper level was extended to accommodate 2 bedrooms, living, dining and an outdoor room.

A lower level was added to provide a further 2 bedrooms and separate living space in a way that allowed for it to be partitioned off as a separate flat at a later date. While the side boundary of the house had a direct northern aspect, a five story block of flats adjacent blocked out all winter sun and severely diminished access to Northern light. Access to the winter sun was possible however in the middle of the house where the overshadowing ceased. This led to the generation of a cross-section that lifted the roof up along the spine of the house to capture this light and sun and draw it deep into the plan. It also efficiently exhausted hot air and assisted in drawing up cool air from the lower level by acting as a thermal chimney. The West End House extension is terminated by a semi-enclosed deck able to be shut down and opened up in response to views, sun, and privacy. The result is a private oasis in a high density urban area.